This year our community department came up with a really cool idea to have SOE employees create custom Mighty Muggs to be auctioned off at Fan Faire. I've always loved painting miniatures and creating custom terrain for tabletop wargames so this sounded like something I'd really enjoy doing. I can't wait to see what some of the other employees have done. Domino also posted a blog of her excellent Mugg painting.

I decided the theme for my Mugg would be my GM character, Rothgar, who is always parading about as a Guardian in full plate. I started with a blank, white, Mugg as seen below. (Ok, i cheated and turned his head around because I forgot to take a pic before I started). 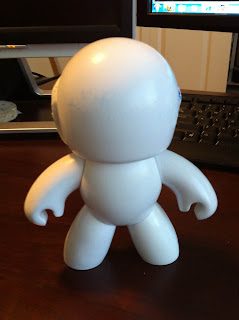 The next step was to use some Sculpey to form the platemail helm. I don't really have a lot of experience sculpting, so I had to experiment with creating shapes and carving out grooves. With a little practice, the Sculpey wasn't too hard to work with. You just have to soften it up first. After forming the front part of the helm, I cut out the eye slit, carved grooves for the plates and bent out the chin piece. 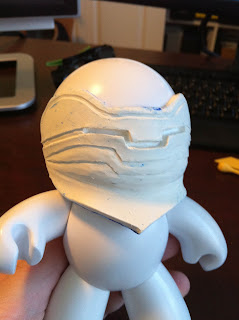 Next I rolled out a really thin tube of Sculpey to use as the edging around the helm plates. It was hard to make this part stick, but with a lot of smearing and scraping I was able to get it to adhere to the main piece. I really hoped that everything would stick better after baking. 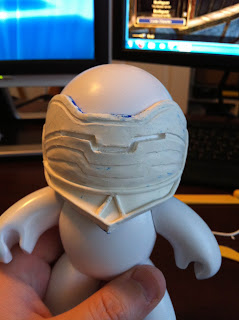 Next I created another long flat piece to form up the back of the helm. This had to have a slight bend at the bottom and form as seamless of a line as possible at the top. After attaching the back piece, I created two circles to represent the hinge piece and then added the spikey bits above them. In the actual picture of the helm, the spike bits stuck out from the head but they would have been too brittle so I sculpted them as part of the helm. 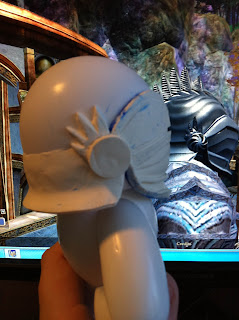 Next was to create the top of the helm. I rolled a piece of clay, attached to the head and then squared it off. Making the top detail was kind of a pain. I rolled out a flat piece and tried to taper it as much as possible. I traced the curve of the head and cut out the design as close as I could with a knife. Once I got it placed I did some more carving to taper the tops and then carved the indents to separate the pieces more. 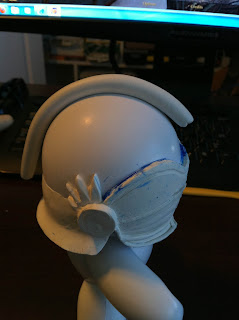 At some point after this I got lazy and stopped taking pictures. I continued sculpting a belt and the flaps (not sure what they are called) for the front and back of the plate greaves. Since the body of the Mugg was already pretty stocky, I decided to paint the detail on the chest and arms rather than build it up any thicker with clay.

I sculpted a sword by starting with the hilt. I rolled out another tube and tapered it towards one end. I kept checking the fit and tapering more until I got it to slide easily into his hand. I cut the guard and blade from more sheets of Sculpey. I used an edging tool to press grooves into the hilt and then carves the blade to the proper shape and put an edge on it. The guard is kind of simple. If I had more time I probably would have done something fancier.

The last bit of sculpting was to create a shield. I looked at a few different designs in the game and went with a shape that I have always liked. Making these shapes uniform on both sides is always a pain so the first thing I did was to draw half of the shield on a piece of paper. I then cut it out and used it as a template to make sure that both sides of the shield were identical when I cut them out of the clay. I carved a few grooves and the shield was done.

Now that everything was carved, I had to figure out how I was going to bake the clay so that it would harden. The instruction said to bake it at 275 but I was sure I'd melt the mug. Since there was no way I was taking the clay off, I had to determine a safe temperature to bake it at. Searching around on the web only found me a link where someone baked their Mugg too hot and melted the head. So I decided to try 240F and checked it often. The Mugg got soft but held its shape. I baked it for about 20 minutes, let it cool and then repeated the process several times. The clay ended up hardening nicely and my Mugg never lost it's shape.

Now for paint. I primed the white Mugg with Games Workship black primer. I prefer black for most things I paint because its easier to build up and leave cracks and crevices dark. Its just harder to make bright colors on a dark primer, but its works pretty well for metals. I dry-brushed the entire model with silver giving it a nice finish. Using black I darkened up the recesses. Using pure silver I painted the highlights. 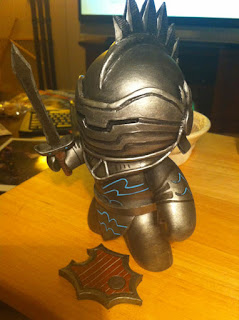 The next task was to paint the detailed lines on the armor. I decided to start with the light blue and then outline the blue lines on both sides with black lines. Wow, such a pain. Again, I had to try to make sure that everything looked equal on the left and right sides of the Mugg. Thinking back, I probably should have drawn the lines first with a pencil but I love doing things the hard way.

After finishing all the paint, I went out to the garage to spray him with a clear-coat. I was hoping I had a clear gloss but all I could find was a matte finish. With the Mugg balanced on a piece of wood, being held like a waiter carrying a tray of food by my left hand, I sprayed the model with my right hand. Unfortunately I never held a job as a waiter and at some point my hand got too shakey and the Mugg took a dive. I stuck my foot out to break the fall but he still landed head-first on the concrete floor. I could have cried. Fortunately there wasn't much damage. A piece of his head-spike broke off but I was able to find it and glue it back on. A little touch-up paint and he was almost as good as new.

My next attempt to clear-coat him was done with him laying securely on his back. After some dry time I flipped him over and did the other side.

Whew... what a long project! I had a blast doing it though and I hope whoever wins him will be happy with the work.
Posted by Greg Spence at 1:25 AM 4 comments: