Moving on to the "next" great thing!

After more than 5 years working on the EverQuest II development team, it's now time to move on to the next great project!

I've been an avid player of the EverQuest franchise since 1999. I was even in the beta for both EverQuest and EverQuest II.  EQ is the reason why I'm working in the game industry.  I've always loved computer games and loved programming, but if it weren't for my passion for EQ, I would have never made the 1800 mile journey leaving family and friends to come to San Diego and join SOE.

I first met the EQII dev team at Fan Faire Atlanta in 2006.  I participated in a "Dev Brunch" where I sat with members of the team (specifically Josh "Autenil" Kriegshauser") and got to pick their brains for an hour.  While many other fans were offering opinions about the game and voicing their complaints, the only thing I wanted to talk about was what happened behind the scenes.  I asked them everything from code questions to hardware configurations and many times I got the same answer.  "Sorry, we can't really talk about that."  I was excited and disappointed at the same time.  These guys were doing what *I* wanted to be doing and I couldn't get enough! 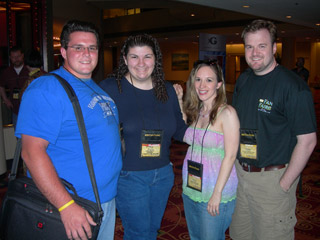 My wife and I (on the right) with some of our guildmates at the 2006 Fan Faire.

When the brunch was over I chased down Scott Hartsman, the EQII Producer at the time, and expressed my interested in applying for a job and getting on the dev team.  Of course he was really busy and probably got a lot of half-serious requests like that, so I didn't really expect it to go anywhere.  During the remaining days at Fan Faire, I made some other friends with dev team members and spent the most time with Eric Swanson.  Eric was also a very active player at the time and we talked a lot about the game.  When I returned home Eric moved to my server and joined my raiding guild.  We stayed in touch almost daily and a few months later he sent me a message in game.

Eric: "Hey, you still interested in applying for a position here?  We're looking for a coder."

Ok, so I don't remember the exact conversation, but it was something like that.  Within a few days my first phone interview was scheduled.  I spoke with Josh who was one of the senior programmers at the time and remembered me from Fan Faire.  Admittedly I didn't have a lot of experience in C++ but had been programming professionally for about 12 years and longer if you count the things I did in my own time.  Despite that, I thought the phone conversation with Josh went well.  A day or two later I was scheduled to talk to Don Neufeld who was the Tech Director at the time.  He was a tough interview but I still thought things went well.  That was until I received an email a couple of days later telling me that they appreciated my time but didn't think I was a good fit for the team at the time.

To say that I was disappointed was an understatement.

Not being the type of person to give up and take no for an answer, I asked Don for advice.  Where did he think I needed work and what could I do to gain the experience they needed?  He gave me some good advice and pointed me at a few good C++ related books which I quickly purchased and read over the next few days.

A few days later, trying my best not to beg, I asked for another chance at the position.  This time, Josh got back with me on a Friday with a written test that he wanted me to take and give back on Monday.  There were a lot of tough questions and code projects on the test, definitely some things I had never done before.  I spent the entire weekend working on it and gave it back Monday.  It was the hardest few days waiting to hear a response.  When they got back to me, it was good news; they wanted to fly me out for an in-person interview.

It wasn't long before I was stepping off a plane in San Diego.  I had never been there before and the beauty of the city coupled with the excitement of visiting SOE headquarters after having played EverQuest for the past 7 years left me beside myself.  If you've flown into San Diego during the day you know what I'm talking about! 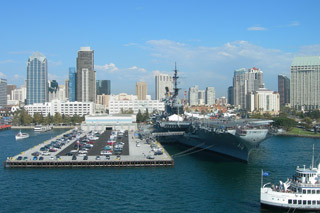 My in-person interviews went well.  I like to think I'm a pretty personable guy and I think it really helped my case to talk to them in person.  They were in a position where they could really use someone to work on the EQII tools and since my background was primarily in "managed" code, they asked if I'd be willing to work on tools if they offered me the position.  I was thinking, hell, I'll clean the bathrooms if you offer me the job!  I was really impressed with SOE and my visit there made me want the job even more.

A few days after returning home I received an offer letter!  The only downside was that it was a 40% pay cut from my current job and that didn't include the increased cost of living going from Tennessee to Southern California!  Even so, it didn't take a lot of thought to know that I wanted to take the job.  It took a little convincing to get my wife to agree to leave our family and friends, but she was very supportive of me and understood that this opportunity meant the world to me.  I accepted the offer and agreed to start 30 days later.

During my last month in Memphis we packed our house, put it on the market, returned to San Diego to find a place to live and shut down two other businesses that I was running at the time.  It was a huge amount of work to do in a month but the entire time I was looking towards the adventure to come.

In my 5 years on the EQII team I worked my way up from a Tools Programmer to a Senior Developer and eventually the Lead Programmer.  I still don't profess to be the most intelligent or skilled programmer at the company or even on the team.  I worked with lots of immensely intelligent people from which I learned a lot.  But I like to think that my hard work and dedication got me where I am today. The EQII team raising our flag over the company headquarters (2012).

As much as I love EQII and love working on the game, there comes a time when you are ready for a change.  I could easily have been happy working on EQII for many more years, but I decided that I really wanted to take what I've learned throughout the years and apply it to a new project.  As much flexibility as we had with EQII, there are just some things you can't change with a mature game.

The next line in the EQ franchise, currently referred to as EQNext, has been in early development for a little while.  It really made perfect sense for this to be the project I moved to.  I still have a passion for the genre and for the EQ lore and this seems like the perfect place for me to build upon my experiences from EQII.  Two weeks ago I made the move to the new team and have begun settling in nicely.  It's so very different working on a pre-launch game and I absolutely love it.  There are still milestones and deadlines so the pressure is there to perform, but for the first time in 5 years I can dedicate 100% of my time to making a game without dealing with the distractions of maintaining a live game.  Don't get me wrong, those distractions can be fun too, but it makes for a challenge to get other things done when you have to deal with random crashes, feature requests or CS problems to name a few.  :)

I'm definitely going to miss EQII and you'll probably see me lurking around the forums late at night just to keep up with the latest developments.  But at the same time, this new project represents a whole new adventure.  And in many ways, that same excitement that I had when I first joined SOE 5 years ago has returned.  I'm not sure exactly what challenges come next but I'm really looking forward to it!

To my in-game friends from EQII, too many to name, you guys don't know how much of an inspiration you've been to me.  The EQII community has so much passion for the game that many times it was the sole driving force behind my desire to come to work every day.  I'm going to miss the community very much but look forward to the day that we can release a new generation of game on you.  :)

Let's not be strangers!