The brownie rule states that when brownies (or any treat of similar nature) are cut, they must be cut of uniform size.  The brownie rule does not prohibit one from eating more than one brownie, but when a brownie is taken from the pan, it must be cut to a size that conforms to a uniform grid pattern.

One may cut a brownie that is larger than the minimum dimension as long as the overall dimensions are multiples of the minimum dimension.  At no time may the main brownie mass be cut to a size that doesn't confirm to the grid.  This can lead to confusion for future brownie cutters and often results in a chain of violations.


See Figure A for examples of valid and invalid brownie cuts. 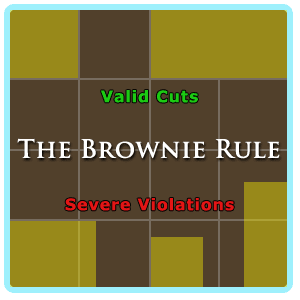 Note that the brownie rule may also be applies to cakes, pies and any such treat that may be cut to even sizes.  As a courtesy, you should always make you guest know when the brownie rule is in effect.